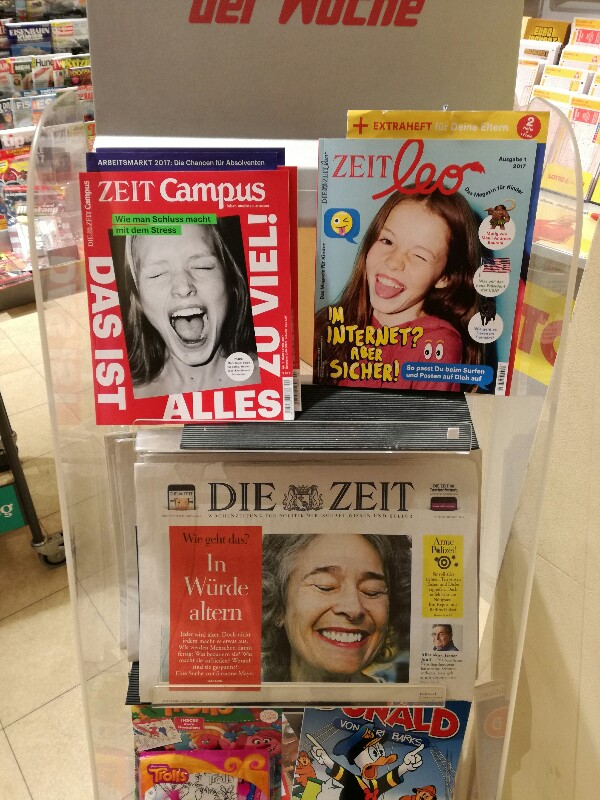 One cannot deny the fact that females on ads or covers sell usually better than males or get more attention except of course for a few examples like male fitness mags or some male product ads.
You will have women on women’s magazines but hardly men. And you’ll have women on many men’s magazines too – hardly ever men.

So if you are a woman you are constantly faced with other women looking perfectly (photoshopped) pretty at you.

How is this influencing the way they feel about themselves?

Seriously, these bins are pretty sh*t at their job. 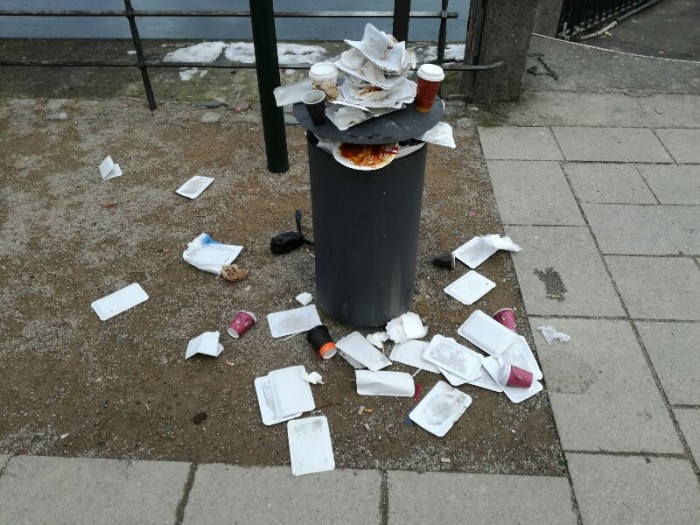 Doesn’t get any work done. (Photo by Stefan Klenke) 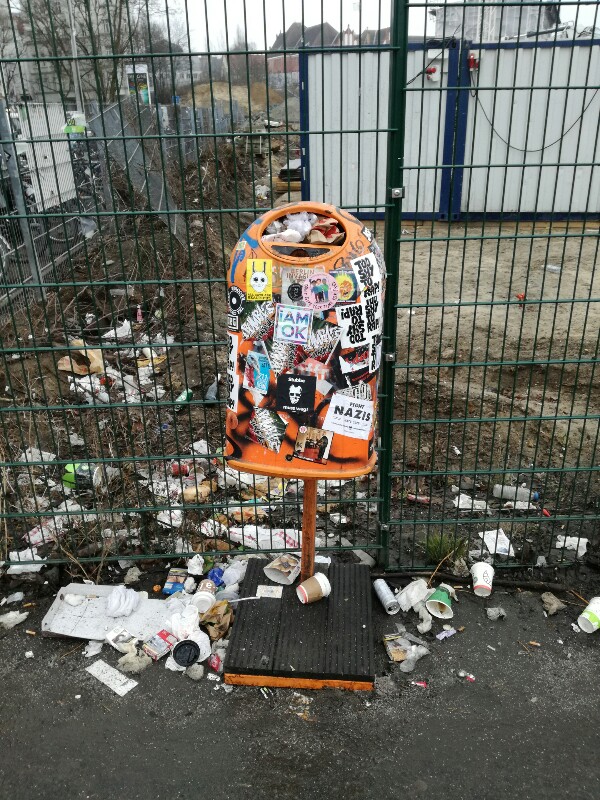 What a messy Punk!!!?! (Photo by Stefan Klenke) 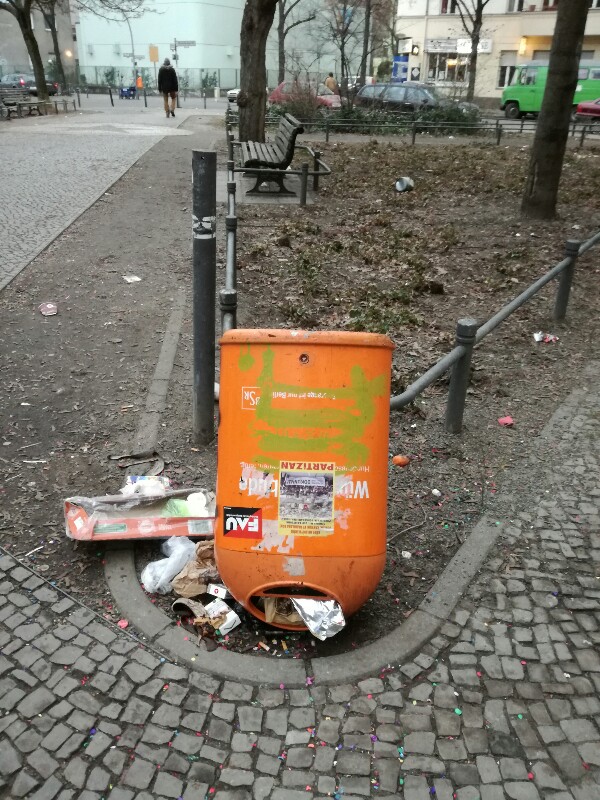 He even turned up drunk!!! (Photo by Stefan Klenke) 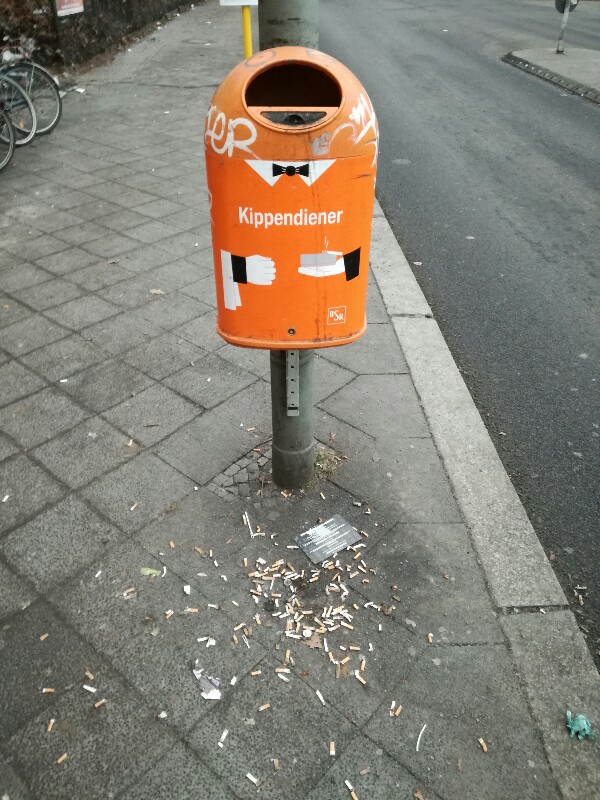 On Saturday, 4 February 2017, I joined ca. 1500 people at the No Ban – No Wall protest march in Berlin. We gathered at the Brandenburg Gate listened to a few passionate speakers and chanted protest slogans. We then walked passed the Reichstag building towards the American Embassy where we gathered to again listen to speeches at shouted anti fascist slogans directed at the US officials behind their rocket-proof walls.

Separation Walls are evil!
For me it was very symbolic to protest against Trumps stupid idea to build a massive wall precisely at the point where the Berlin Wall once divided our city and nation. We humans must learn that separation walls are not a way to improve anything in the world. They will just cause more suffering and hate. We must work towards a world where we do not need walls any more. 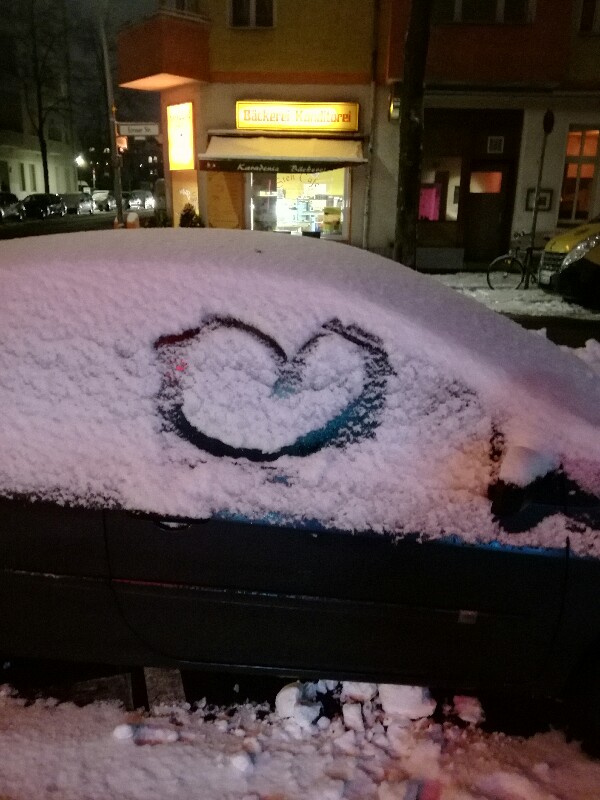 Looks like people threw snow balls at them. (Photo by Stefan Klenke)

During the years of walking around Berlin with my camera I noticed hearts everywhere in lots of different forms. I have a huge street photo collection of them. It’s actually my biggest collection of my many themes. It makes me happy that the symbol for love is such a popular theme in this city.

These are just a few of the very recent examples. 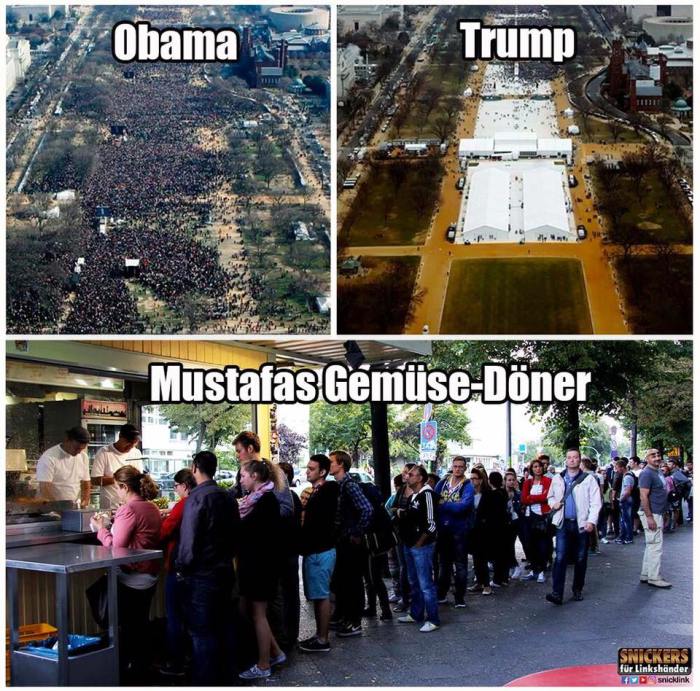 If you are from Berlin – or went to Berlin and to Mustafas Gemüse Döner then you probably just laughed as much as I did. I think this perfectly sums up Berlin humour to me. And also shows a real riddle and phenomenon. Berlin has around half a trillion Döner kebap stores – and probably 99 percent of them do better döners than Mustafa. And at none of them you have to line up for an hour – but for some reason people seem to think Mustafa is the only Kebap store in the city. I do not get it.

Here a few “handy” street observations from my walks through my new neighbourhood Berlin Treptow. 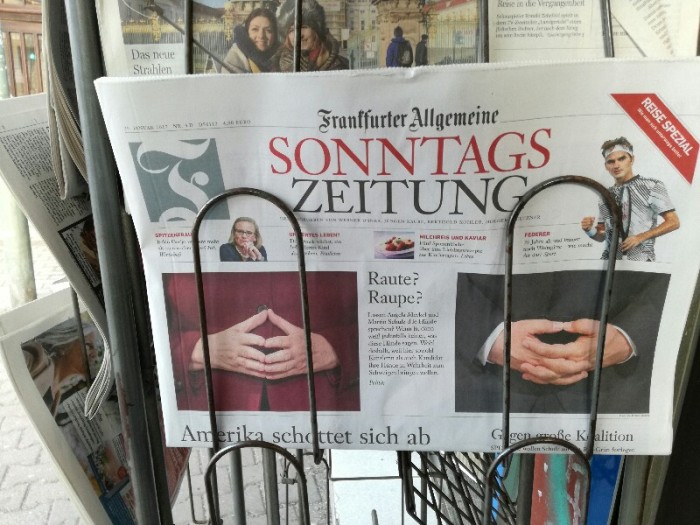 Why do we always lose just one glove? – Berlin Treptow (Photo by Stefan Klenke) 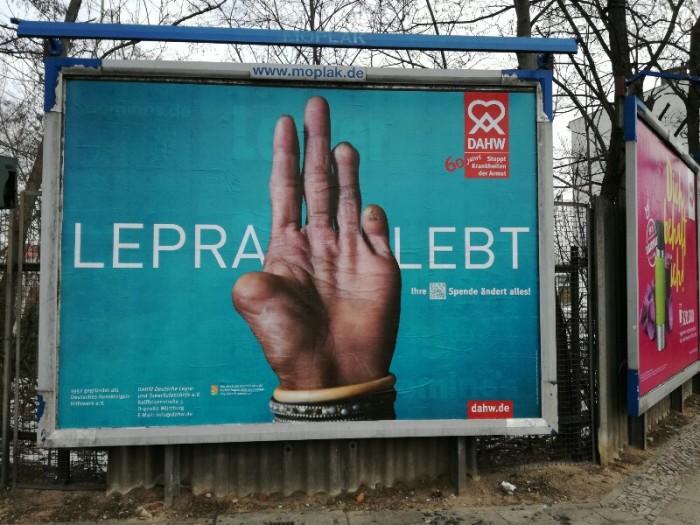 Does anyone know what this means? (Photo by Stefan Klenke 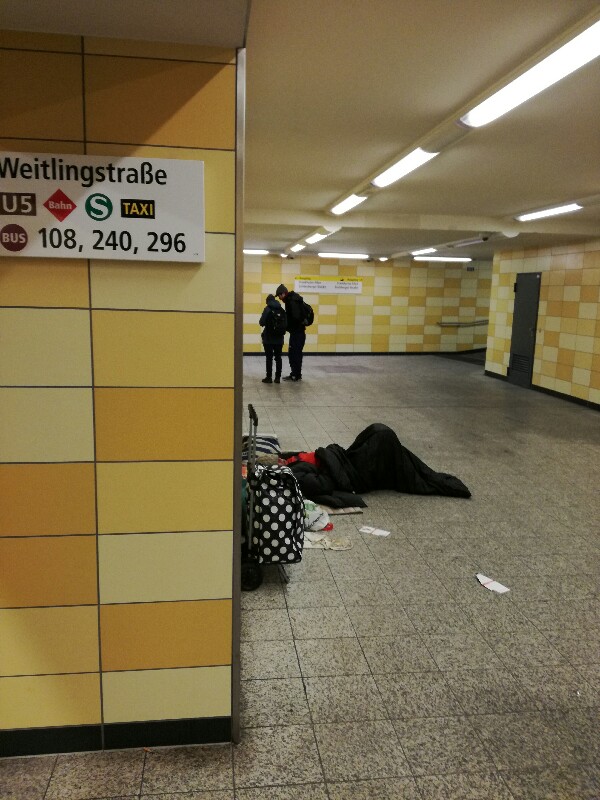 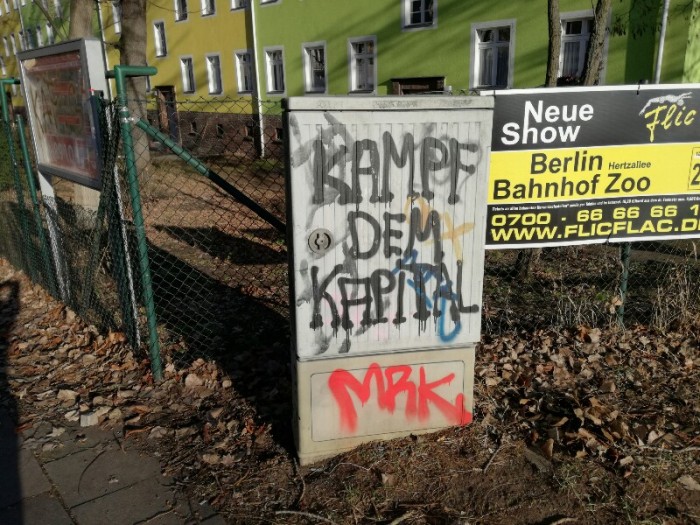 Translates as “Fight the capitalism!“ – Photo by Stefan Klenke

I just heard on the news that the rents in Berlin increased by 70%(!!!)  in the last 10 years. The price is now around 10 Euro per square metre when it was just around 6 Euro a decade ago. The reason for this incredible rise according to the news was the increase in population. I was disgusted to hear this. I think the real reason is a system that supports greed and profiting on the needs of human beings. The system allowed house owners to raise and raise the rents without a healthy limit.

New Berliners who moved from other cities and countries where they already were used too expensive rents willingly accepted to pay those “still relatively cheap“ Berlin rents while the less fortunate poorer Berliners were pushed out of the city centres to the cheaper borders.

In a popular city  like Berlin there will always be people who would still be able to pay for way too expensive rents. But still the problem is the system who failed to build cheap social housing and instead decided to cash in and build luxury expensive apartments for renting or buying and did not introduce an effective rent cap – and created another gentrificated unfair unequal city. This system is called Capitalism. 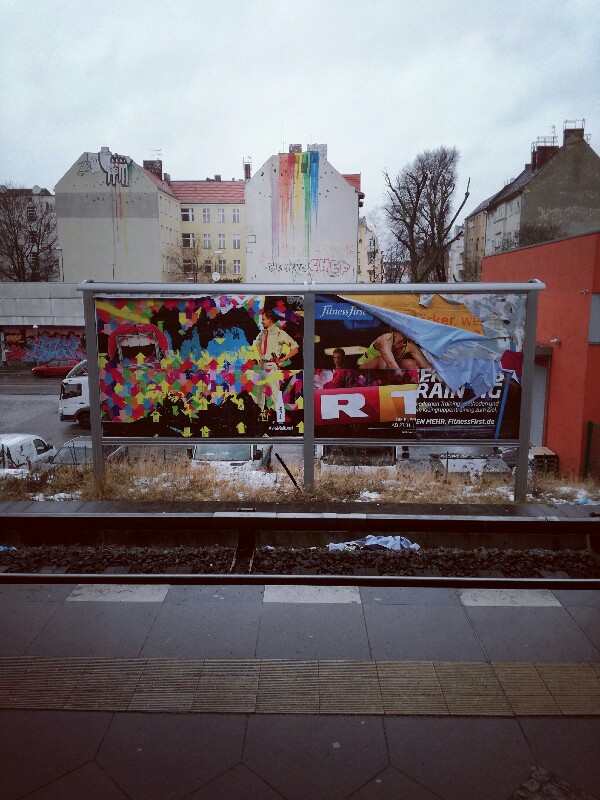 It’s a really grey and boring looking day today that’s why I was happy to see this colourful mix of street art and advertising posters at S-train station Neukölln this morning. Happy Friday, everyone!!! 😍😊

Graffiti on a house wall in Rixdorf area of Neukölln

Having lived in Neukölln a few years I can confirm that it is in many areas a dirty place. A part of me feels it adds to the charme and undergroundy authentic vibe of the more and more hip district in the South West of Berlin. Another part is sad and angry that people chuck their rubbish everywhere disrespecting our environment.

The writing “Neukölln bleibt dreckig!“translates as “Neukölln stays dirty!“ I see it occasionally written on walls in the city; sometimes with Berlin, Kreuzberg etc. instead of Neukölln. I understand it as a angry cry for people who are scared of gentrification which is “cleaning“ up more and more areas and making the rents go up and up and thus taking away the home districts aka Kieze of people who cannot afford to live there any longer.

I saw this on an art studio in the trendy Rixdorf quarter in Neukölln Berlin. It translates roughly as “This is no hip district!“ And a little less directly translated it means: “Fuck off, rich people and hipsters! Leave us alone and our rents low!“ I guess when you have to write a message like that it probably is aleady exactly that – a hip district taken over by rich people, hispsters and high rents.